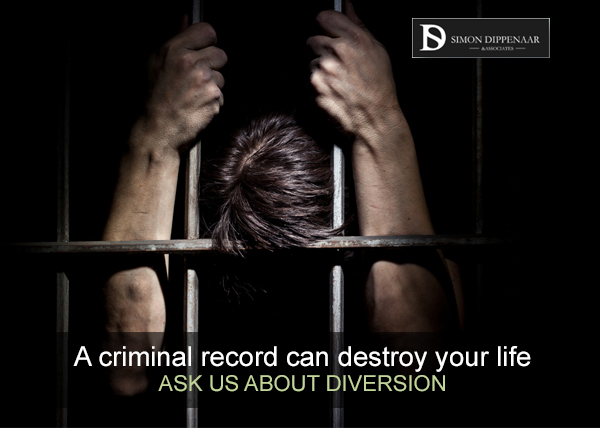 Are you facing a criminal charge, or do you know someone who is?

The possibility of a prison sentence is troubling enough, but even if there is no risk of prison, being found guilty of a crime can have other long-term effects that endure well after any sentence has been served, or any fine has been paid.

How many people have lost their jobs, or been overlooked for a promotion, as a result of being found guilty of a crime?

Driving under the influence could mean losing one’s driver’s licence. What about a student who gets caught with some pot, and ruins a bright career before even graduating? The list goes on.

A criminal record can literally destroy one’s career, and make no mistake, employers do check.

It’s a truism that one moment of madness, can bear a lifetime of consequences.

But, have you ever heard of diversion?

Diversion is a sort of out-of-court settlement. It’s not the same as a plea-bargain, where one can plead guilty, and possibly accept certain conditions, in exchange for a lesser punishment. Though that has its benefits, it cannot avoid certain consequences, including a criminal record.

Diversion, on the other hand, is sanctioned by Section 6 of the Criminal Procedure Act, and is a means of diverting a criminal prosecution from the entire trial process, and thereby escaping not only any possible prison term, but also a criminal record.

Diversion is a form of restorative justice, and was introduced to help ease the backlog of court cases, thereby allowing courts more time to deal adequately with increasingly complex cases, and avoiding the long-term effects on those found guilty of crimes, more especially juvenile offenders. But, diversion also applies for adults.

Restorative justice involves offenders accepting responsibility for the crime committed, making amends, and initiating a healing process for themselves, their families, the victims, and the community.

If the offender admits responsibility for the offence, and agrees to certain conditions, the state prosecutor can suspend the prosecution. A magistrate or judge can also order diversion.

Diversion can take place prior to arrest, prior to being charged, prior to pleading, or even prior to the trial or sentencing.

We can help an accused by using our experience within the criminal justice system to make representations for diversion, by presenting the case in the most favourable light, and negotiating with the police, public prosecutor, magistrate or judge.

It could make a world of difference.