Bubbles Get You Drunk Faster 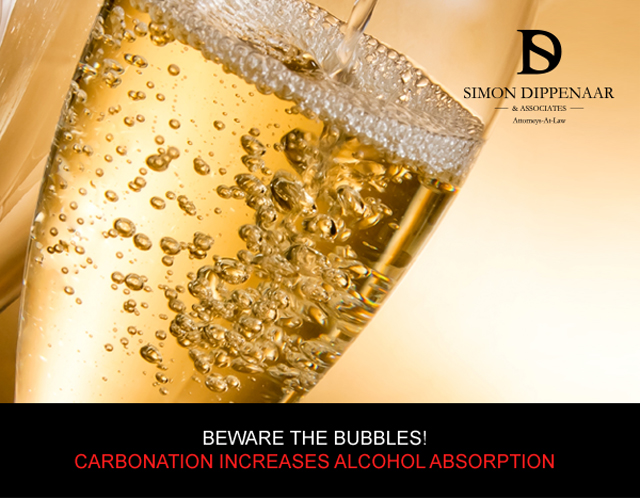 Elsewhere on this site we have explained the legal limits for alcohol in the bloodstream while driving and what they mean for the drinks you consume on a night out; but given our dismal record for alcohol-related road traffic accidents in South Africa the information bears repeating. Our limit of 0.05g alcohol per 100ml of blood is low by international standards. In most states of the US, legal limits are 0.08-0.10g per 100ml, and in England and Wales the limit is 0.08, though Scotland mirrors South Africa with 0.05.

How much is enough?

The widely accepted rule of thumb regarding safe consumption within the 0.05 limit is one unit per hour, but one unit does not mean ‘one drink’, if your drink is a double brandy or large glass of wine. One unit equals two thirds of a beer or spirit cooler with 5% alcohol content, or 75ml of red or white wine with an alcohol content of 12% to 14%, or one 25ml shot of spirits, all per hour. Very few bars or restaurants serve wine in a 75ml portion and 25ml of spirits is well below the average shot size. So straight away your consumption is likely to veer into unsafe territory unless you are very careful.

Not everyone absorbs alcohol at the same rate

Furthermore, not everyone absorbs alcohol identically. The way alcohol affects you depends on a number of factors, including:

Medications or drugs will not affect your blood alcohol level, but combining certain medications with alcohol can make you feel more impaired when performing certain tasks.

Critically, there are some alcoholic drinks that are absorbed more quickly than others: fizzy ones. And it doesn’t matter whether the alcohol itself is carbonated, e.g. champagne, or even a beer, or if still alcohol is combined with a fizzy mixer, as in a vodka and Coke. The explanation lies in the science of carbonation.

Carbonation increases pressure in the stomach, which helps to force alcohol into the bloodstream via the stomach lining. Drinks that are carbonated or caffeinated can also increase the speed at which your body absorbs alcohol as they tend to irritate the lining of the stomach, increasing the rate of absorption.

At Simon Dippenaar and Associates we strongly support responsible drinking. There are now so many ‘get-you-home’ services available that there is no excuse for driving drunk. The fizz factor, however, may mean that you have carefully adhered to the advice given above but have unwittingly found yourself stopped at a roadblock and over the limit, perhaps after a celebratory glass of champagne for a colleague’s promotion at work.

But if the worst happens…

If this happens, call and speak to Simon on 076 116 0623 immediately. He will arrange your bail and prepare your defence. Driving under the influence is a serious offence which can harm your career and your private life. Seek legal representation as soon as possible to ensure the best possible outcome for your case.