Extradited for possession of cannabis?

The legalisation of dagga has been big news since the Constitutional Court decriminalised the possession and cultivation of cannabis in private by adults for personal consumption in September 2018. But what happens if you’re caught with marijuana (cannabis) overseas? What laws apply? Can you be extradited for possession of cannabis? This is the predicament Jason Smit, a South African citizen living in the United Kingdom, found himself in when he was arrested for the alleged possession of cannabis. 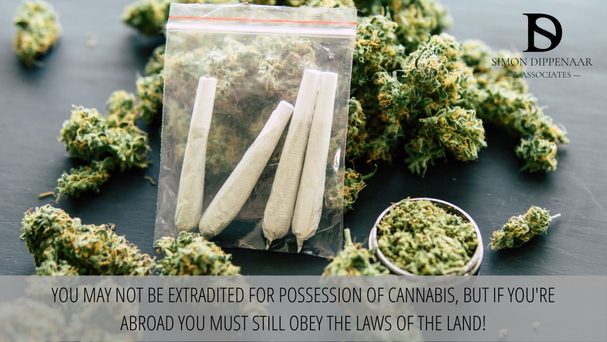 The drugs were found in his apartment and in two other residences leased in his name and Smit was charged for various criminal offences relating to production, cultivation, possession and supply of dagga. Smit was released on bail but failed to comply with his bail conditions and a warrant was issued for his arrest.

The United Kingdom then requested that Smit be extradited to stand trial.

The rule of law is the very foundation of democracy and a functioning and effective society. Simply put, the rule of law states that no one is above the law, that all crimes must be investigated and, if convicted, the offender should be punished accordingly. The challenge is how to accomplish this if the perpetrator is outside the borders of the country in which the crime was committed?

Extradition is defined in the Merriam-Webster dictionary as: “the surrender of an alleged criminal usually under the provisions of a treaty or statute by one authority (such as a state) to another having jurisdiction to try the charge.”

South Africa has ratified extradition treaties with 15 countries to date, with several others either agreed to and not ratified, or still at negotiation stage. Extraditions in this country are governed by the Extradition Act 67 of 1962.

When does extradition apply?

Section 1 of the Extradition Act defines an “extraditable offence” as crime that applies under the laws of both the foreign state and South Africa and carries a six-month prison sentence or more. This is known as the rule of double criminality.

However, a country is not obliged to surrender an alleged criminal to a foreign state, because of the principle of sovereignty which gives every state legal authority over the people residing in its borders. Importantly, the extradited person is entitled to a fair trial and South Africa will not extradite someone if they may be prejudiced at their trial because of their gender, race, religion, nationality or political opinion.

So, what was the outcome of the Smit case?

Smit challenged his extradition claiming that the Schedule to the Drugs and Drugs Trafficking Act No 140 of 1992 is unconstitutional and invalid since the drug was proscribed. Cannabis was not lawfully retained in the Schedules, Smit said, so he had not broken the law. Although being in possession of cannabis was banned in the United Kingdom, this was not the case in South Africa and so the double criminality rule did not apply, and he could not be extradited for possession of cannabis.

Remember it is still illegal to deal in dagga! Possessing cannabis for personal use is now legal in South Africa; growing it to sell or supply to others is still a crime. And Smit was charged with the production, cultivation, possession and supply of cannabis. This distinction is critical. Whichever way you look at it, dealing in drugs is breaking the law.

The court dismissed the application subject to Section 63 of the Drugs and Drugs Trafficking Act 140 of 1992 and the amendments made to the Schedules in terms of section 63 by the Minister of Justice and Correctional Services were declared to be inconsistent with the Constitution and therefore invalid.

Smit was subsequently arrested for running a hydroponic lab in Strand, Western Cape without the appropriate licence and was denied bail.

If you need legal advice or assistance related to cannabis possession or consumption or on any other matter, contact Simon on 086 099 5146 or email sdippenaar@sdlaw.co.za.