Don’t get locked up during lockdown

Lockdown has led to high numbers of arrests. Here’s what to do if it happens to you. 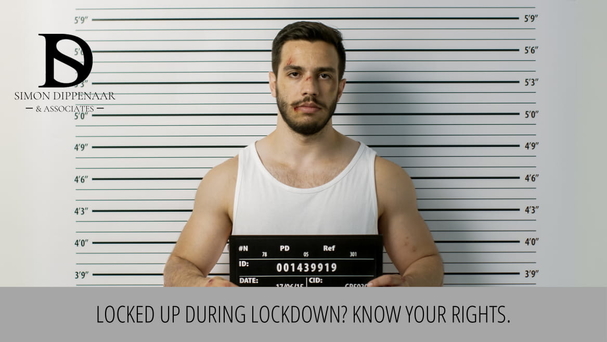 Locked up during lockdown? Lockdown has brought with it an increased number of arrests and incidents of police brutality. In the first three weeks of level 5 lockdown, more than 100 charges were laid against the police for abuses. Level 4 regulations are unclear and open to interpretation. For example, exercise is permitted but there are to be no “organised groups”. Among the cyclists we know, one interprets “organised group” to mean a club ride or organised event like a race. Another thinks any more than two cyclists constitutes a group. Who is right? No one knows, as our rules don’t define a group by numbers, such as five (Switzerland) or 10 (France).

So it’s up to the police to decide who is breaking the law and who is not. In this climate of ambiguity, normally law-abiding citizens may find themselves on the wrong side of the law. What should you do if this happens to you and you are arrested?

Everyone arrested has certain rights guaranteed under the Constitution. Whether you feel you have been wrongfully arrested, for example due to a difference of interpretation of an opaque rule, or have been caught red-handed committing a crime, there is certain behaviour incumbent on the police making the arrest. You have the right to:

Generally, the South African police force upholds the Constitution and acts within the law. Occasionally it does not. Unfortunately, at present our police are overreaching their authority and you may find your rights are breached. It is worthwhile making a note – mental or written if possible – of the following:

Most importantly, avoid inflaming the situation. It won’t help your case, no matter how aggrieved you may feel.

Lockdown lock-up – what to do if you are arrested unlawfully

Right now, because of the murkiness of the rules, it’s quite possible you will be arrested unlawfully, or feel that you have been. Keep calm and know your rights.

In your written notes, record the following, as far as you are able:

If you have no writing materials and your request for pen and paper is turned down, do your best to make mental notes of these points and write a full account as soon as you are able.

Lockdown lock-up – what to do if you’re a victim of police brutality:

Force has been a hallmark of police activity during lockdown. The United Nations has said that South Africa is abusing the lockdown with gratuitous violence, “…using rubber bullets, tear gas, water bombs and whips, to enforce social distancing, especially in poor neighbourhoods”. This constitutes assault. If you are a victim of this, here are some steps you can take.

If possible, obtain important information at the scene of the assault, such as:

Go to your nearest police station to report the assault and lay a criminal charge against the offending police officer. If possible, seek the assistance of a lawyer when opening the criminal charge. We can help you with this.

If you are in police custody, you can request that a police officer take you to a district surgeon to be examined.

Although you have reported the incident of assault to the police, it is important that you write down the entire incident for your own personal records. Be as specific as possible in detailing the assault and the injuries you sustained.

Cape Town law firm SD Law & Associates is an expert in criminal defence and bail applications. We are available 24 hours a day / 7 days a week. Contact us on 086 099 5146. Save this number in your phone under “bail lawyer”. In the current climate, you never know when you might need it.

This entry was posted in Uncategorized. Bookmark the permalink.
Disclaimer